Showing posts from 2019
Show all

Touring with Turo - The Pros and Cons

October 03, 2019
Driving to more remote yet scenic places as a side trip to a big city can reveal places and ways of life unknown to folks who don’t get out of the downtown bubble.   Not everything a city dweller enjoys is in the city, so part of the experience of a culture is to get to know where folks go to take a break.   For instance, when visiting Washington, DC, why not hit Virginia Beach too?   Maybe next time you’re in Boston, think of taking a couple hours to go to Cape Cod.   Maybe if you’re in New York City, take a visit to Long Island (though better plan that one in advance).   But if you find yourself in Detroit, it might be better to go to Windsor just across the Canadian border and stay put. :-P  As such, for once, I will regale you with experiences not from software I'm writing, but that I'm using as a consumer. Background - What brought me here? I was in quite a conundrum during a recent trip, visiting a city where several famous Ivy League schools were all ab
Post a Comment
Read more

Unit Test Database Mocking in Golang is Killing Me!

September 05, 2019
For some reason, writing a particular set of unit tests in Golang proved to be an extreme hassle.  In this case, I was trying to add a column to a table and then write a unit test to verify this new functionality.   No matter how much I looked around for where to correctly specify how to build this table with the new column, the Cassandra database kept complaining the column didn’t exist.   Imagine how frustrating it is to specify a relational database schema that seems to be ignored by your unit tests. Background Our system consists of a Cassandra database plus a Go backend server.   The Go unit tests require Cassandra to be running locally on a Docker container, but do not seem to actually utilize the existing databases, opting to make its own that is out of reach from anything I can see from TablePlus.   The Go code itself utilizes these objects through some level of indirection by a manager, a harness, and a couple modules dealing in the actual queries. The Fix
Post a Comment
Read more 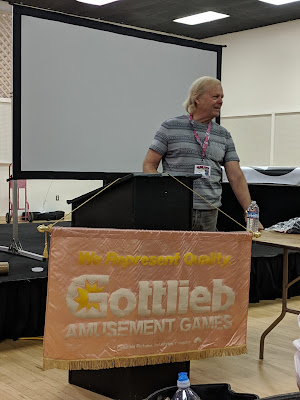 Back in May, I got to hang out in California for a couple weeks to attend a couple conferences: Google I/O and IoT World.  I did a couple panels at IoT World, and one of them is already summarized on this previous blog post ; the other one is coming later.  However, as a bonus during my time in California, I also got to attend the Golden State Pinball Festival in Lodi.  Here, they had John Osborne, a pinball designer who worked at Gottlieb from 1972-1984.  The following are expansions of notes I took during his Ask Me Anything presentation. A Bit of Background John Osborne started his professional journey by studying electromechanical (EM) engineering at Fresno State.  This, of course, elicited cheers from the local crowd.  After college, he started working at Gottlieb in 1972 at the age of 21.  Besides Gottlieb, he was also interested in working at Chicago Coin, which he said was sketchy, because the hiring manager's last name was always changing; as such, he never applied.
1 comment
Read more

May 30, 2019
I was graciously invited to give two panel discussions at the IoT World conference that happened last week in Santa Clara, CA.  Since the panels are not recorded, here are my thoughts and jots from before and during the Wednesday 5/15/2019 panel, entitled  Wrangling IoT Data for Machine Learning .  (Actually, I'm going into even more detail than I had time for at the panel.)  Despite that the conference organizers approached me about speaking on behalf of my former employer about some topics that honestly I was given just a few weeks to investigate and could only report back with failures even now, I managed to convince them that I was fluent in other things that were more generic -- unrelated to the job I knew I was about to quit. (Note: My thoughts and jots for the Thursday 5/16 panel are coming later.) Business Calculations The first question we were tasked with answering in this panel related to the business calculations that must be made before taking on a project
Post a Comment
Read more

The Fastest Path to Object Detection on Tensorflow Lite 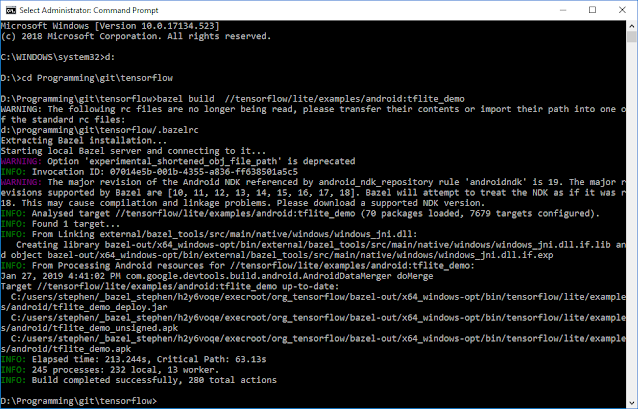 Ever thought it would be cool to make an Android app that fuses Augmented Reality and Artificial Intelligence to draw 3D objects on-screen that interact with particular recognized physical objects viewed on-camera?  Well, here's something to help you get started with just that! Making conference talks can be a chicken-and-egg problem.  Do you hope the projects you've already worked on are interesting enough to draw an audience, or do you go out on a limb, pitch a wild idea, and hope you can develop it between the close of the call for papers and the conference?  Well, in this case, the work I did for DevFests in Chicago and Dallas yield a template for talks formulated by either approach. The most impressive part is that you can recreate for yourself  the foundation I've laid out on GitHub  by cloning the Tensorflow Git project, adding Sceneform, and editing (mostly removing) code.  However, it wasn't such a walk in the park to produce.  Here are the steps, edited do
Post a Comment
Read more
More posts