Showing posts from February, 2018
Show all

How Old Am I, According to Spotify 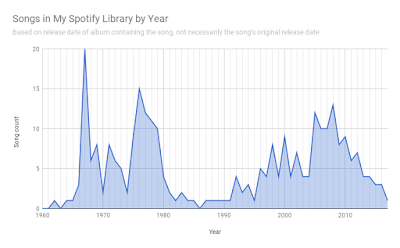 I'll explain this down below. Spotify facilitates very convenient access to lots of great music on many different types of devices.  However, being a standalone application that manages its own music in its own way means you can't interact with the songs as you could when they were in MP3 format or on vinyl.  For developers, the Spotify APIs can change the game. A Brief History of My Music Listening I'm a bit of an odd bird in my musical tastes, which were influenced by my mom as we listened to a lot of oldies stations driving around to various events and activities.  Where most oldies stations typically play music that is 30-40 years old, one station in Dallas (KAAM 770) plays music that is around 50 years old.  Thus, back in the 1990s, they were playing lots of big band and swing standards.  (Now they have caught up to where traditional oldies stations were back then, but playing music more along the lines of The Carpenters rather than classic rock.)  I develop
1 comment
Read more
More posts