Showing posts from March, 2017
Show all

Appreciating Huge Light Marquees On Game Shows Of the Past 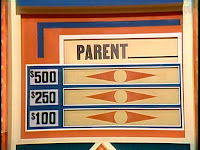 Recently, I dug up an old email where I was musing on the big marquee on an old television game show called The Magnificent Marble Machine .  It was a very fancy prop at the time, as most television shows of the era relied on art cards with big, bold letters that would be flipped, slid, or otherwise revealed by stagehands upon the emcee's verbal cue.    k Slide it, Earl! ( Match Game ) - Survey Says?! ( Family Feud ) - Sources: YouTube, Game Show Utopia This is about as fancy as it got for electronic graphics on game show props in the 1970s ( Tic Tac Dough ).  However, they never upgraded this board during the 1980s... Source: Dailymotion And a couple shots of the Magnificent Marble Machine game board in action.  Looks like a plain ol' marquee, but really an astonishing feat of engineering given normally chintzy television props, especially for its era... Source: Gameshows Wikia Cashing In On a Fad Now, the Magnificent Marble Machine was a show produc
Post a Comment
Read more
More posts