I was invited to attend Google I/O 2016 at pretty much the last second -- only about 10 days before the start of the event.  This is my first time here, though my wife DoesItPew has been here twice before already.  We got to attend the convention together for once, and now I am dodging the cold wind blowing in over the hill here at dusk from the Shoreline Amphitheater in Mountain View, CA.

Prior to the event were many different Day Zero parties including a really large one thrown by Intel.  As an Intel Innovator (though I rarely speak about that because I suck at publicizing myself and/or I mostly use their products on projects covered by NDAs), I got to show off some new hardware prototypes made recently and impressed several people who are fond of homemade hardware and/or LED products.  Unfortunately, my favorite prototype died on Wednesday after the Google I/O keynote; it probably got shorted when one of the power wires poking through my shirt decided to come loose and touch the other power wire.  Now all it does is burn my finger really badly whenever I try to touch the microcontroller. after plugging it in  Oh well, I can just replace it when I get home.  Meanwhile, no extra attention for me... :-(  I also got to meet some fellow employees of my company from different sites I don't usually interact with (and tour their two offices in the city), and met a couple people from a relatively recent acquisition we made in San Francisco.

As you may have heard, the lines to attend many of the sessions were absolutely ridiculous and caused people to miss out on things they wanted to see.  That combined with the nearly 90-degree weather here in the Bay Area led to a lot of unhappy, hot, and sunburned folks.  The folks I met from our acquisition were so disappointed with the lines that they bailed after the first hour and vowed to watch I/O only via the live streams!  They would not even bother showing up in person on Thursday nor Friday.  But, as an amelioration for those of us who suffered through that and those who were not selected for the conference, you can (for probably the first time) experience the sessions of this I/O on the Google Developers YouTube Channel.  Thus, there's not really a reason to attend a talk unless you want to see something demonstrated live.  The real reason one would spend $900 on a conference pass now is to come out and schmooze with Googlers and other enthusiastic developers deemed worthy and discuss lofty ideas one could develop on the backbone of all the stuff Google has come out with now and will release in the near future.  Plenty of them are around and enthusiastic to talk to you, showing off intriguing demos on anything from mobile app "point-and-click" testing to a music box made out of a revolving wooden disc and sticky notes with "Do", "Re", "Mi", etc. on them being analyzed in real-time by a camera and translated into text that feeds into a synthesizer.  A Google Maps API guy clarified the Terms of Service for me, and stated my idea for "Maker's Markers" wouldn't violate it.  Goodbye OpenStreetMaps.  We have had previews of Android Auto in various scenarios where DoesItPew tore apart the UI with various Googlers for about 10 minutes while they took diligent notes.  (It's good to have someone so opinionated, but can you tell who wears the pants at our house? :-P)  I have spoken with people about Firebase, Project Tango augmented reality, various machine learning ideas, things I want to do relating to what I've seen here the last two days (which you can join on the new Google Spaces app), and of course on progressive Web design and improving the user experience for my company's mobile offerings. 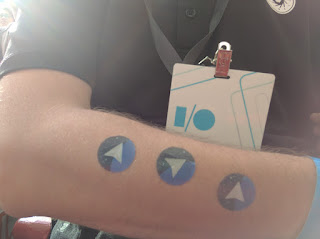 NFC "tattoos" representing my three ideas on the Big Idea Wall.  One may or may not be to rename it the Big Idea Board... doesn't that have a nicer ring to it? :-P

To see for yourself the ideas I added to the Big Idea Wall, check out these links and please join the conversation:

As if I/O 2015 wasn't inspirational enough just from watching the keynote, now I will have a whole 'nother year of projects to keep myself busy after work, not to mention plenty of stuff to share with my coworkers and help build new and innovative aspects of the financial industry as it pertains to auto finance and home loans.

Tomorrow is the final day of I/O 2016, and we have yet to see what that will bring.  After that on my agenda is to hit the Bay Area Maker Faire in San Mateo and the Computer History Museum, not to mention see some family and friends who live out here on the "Left Coast."  And if that's not enough to do, once I get back late Sunday night, there's yet another conference for software engineers the following Tuesday at my workplace and then I'm playing a gig with the corporate band to celebrate the recent expansion of my workspace -- the awesome innovation lab known as The Garage.

Meanwhile, it's so friggin' cold out here...
Posted by GOSHtastic - Game shows, Options, Software, and Hardware at 8:17 PM No comments: