Since last time I wrote in, I have been extremely busy preparing for Texas Pinball Fest 2016 -- tried to get four machines ready, then three, and then... oh well... only the two I had working to begin with were actually working by showtime.  Meanwhile, I had started to investigate a couple other projects, but never got something going nice enough to warrant writing a blog post on.

Now that Texas Pinball Fest is over, and I swear my games are acting like rabbits (if you know what I mean ;), I'm trying to step back and work on some of the projects I had going before this massive push to restore a bunch of pinball machines happened.  However, I have another great big push for this weekend to get prepared for the North Dallas Area Retrocomputing meetup.  I've had vintage computers hanging around me since they were new, but have acquired some "new" stuff since around Thanksgiving (especially from Fred's "Warehouse of Wonder"), and need to get all the new acquisitions nice & shiny & displayable.  And if you read thoroughly, I'll treat you to some shareable work I did to make this happen.

The first system on the docket is an IBM PS/2 Model 25 286.  It had a crushed PS/2 port in the back.  Fortunately, there is a store very close to my house that sells all kinds of modern and surplus electronic parts, and had plenty of compatible PS/2 ports in stock.  With a couple hours' worth of work, I replaced the sad old jack and was able to boot up the computer for the first time in who knows how long.  Only problem is I'm striking out on all the floppy disks & drives from Fred's so far, and this was no exception; the computer is complaining of a floppy disk or controller error.  I will need to plug in my HxC2001 floppy drive emulator to try diagnosing the problem further.  Nevertheless, it runs Cassette BASIC like a champ... 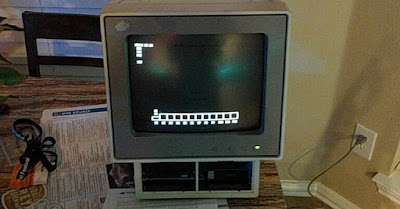 Here's its first sign of life in a while.

By the way, if anyone has a source for faceplates to cover up the two holes there in the front, or has an STL file where I could print some new ones out, that'd be appreciated.

After that, I worked backward and attempted to power on the IBM 5162 (XT 286) for the first time since receiving it.  All the Nichicon & Rubycon capacitors in the power supply looked to be in excellent condition, so I didn't bother replacing anything despite having acquired all the right components a couple months ago.  At first, it fired up but only showed the memory count.  After rearranging the expansion cards a little bit, it beeped a little bit differently at POST, but it started showing helpful diagnostic messages as well.  After trying several combinations of OS disks and drives, I finally reverted back to my trusty HxC2001 controller and it loaded DOS 3.3 like a charm.  To my surprise, it actually remembered the set date & time for a few minutes after a power cycle, but ultimately I do need to put in a replacement BIOS battery (which I also sourced locally, but just lack a cradle for at this time).

The 5162 comes with more flexible setup options than the 5150 (e.g. it actually has a battery because it needs to remember more settings than you can cram on two 8-bit DIP switches), but unfortunately, you need a setup disk to reconfigure the BIOS.  They didn't make it easy; there's no program easily loaded in the ROM that will come up when you hit F2 or DEL.  You must have the bootable setup disk, or if it doesn't boot, load an OS first and then call it up manually later.  Well, it turned out to be quite a hassle to get the setup disk going as an HFE image for the HxC, but eventually my perseverance paid off.

In the off chance you have an HxC floppy disk emulator and want to get started quickly with an OS or the setup disk set up in 5.25" formats, which they don't seem to offer on their site, save yourself some hours and utilize the hours I already spent making them.

MDA_GAMES1.HFE - This is a curated collection of games (as a 360K 5.25" disk) that have been tested to work on an IBM 5150 with MDA graphics adapter and 5151 monochrome (green-screen) monitor.  Some games are executables, others have to be loaded from BASIC.  As it's a 360K disk image, it will not work with DOS 1.1.

ATADSETUP.HFE - This is an image of the "Diagnostics for the IBM Personal Computer AT" floppy (80-track double-sided 5.25" disk).  The original source of the disk image is minuszerodegrees.net (a great site for early IBM PC system info), but it was not straightforward to convert the IMG into an HFE file.  Also, this disk image wouldn't boot (maybe it needs to be set to 96 tracks instead of 80?), but after loading DOS 3.3, I was able to switch to this disk image and run SETUP.COM (or whatever the executable is named to kick off the setup & diagnostics program).

Sorry I forget what the original sources of the other materials were; in many cases, I had to do digging & tweaking periodically over many weeks to get all these things to work.

The final story is that of the Mac Plus.  I was not forgetting about it while rummaging through Fred's looking for parts, as when I stumbled across an SCSI enclosure containing an 8x CD-ROM drive, I thought that enclosure might make a perfect candidate for a hard drive enclosure for the Mac Plus.  And sure enough, Fred's was a treasure trove of old SCSI equipment; I was able to find tons of SCSI-2 and SCSI-3 drives, cables, and terminators free for the taking.  (I only took five drives. :-P)  Combine that with some system disks & utilities purchased from rescuemyclassicmac.com, and now I have a 1GB hard drive (unfathomable in 1986, in 3.5" form factor no less) on my 1986 Macintosh.  That'll make a great scratch disk for Photoshop 1.0. >-D

Anyway, it's a pretty well-documented procedure on how to use non-Apple hard drives with the Mac Plus; the hardest parts for me was getting a hold of the Utilities disk (luckily the site I mentioned above sells disks with the already-patched version of the disk formatter utility) and actually removing/replacing the CD-ROM drive with the hard drive in the enclosure.  Other than that, with the factory settings on the Seagate ST51080N drive along with the IBM-branded external SCSI enclosure, the Mac picked up on the SCSI hard drive right away. 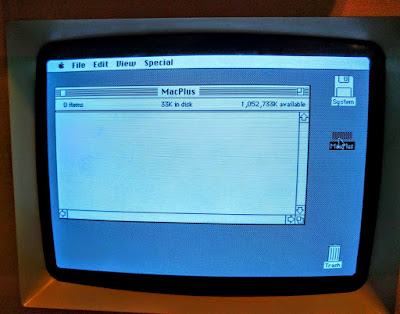 Ohmigawd, that's like ALL TEH K's EVER MADE.  They're right here.  This would have made one helluva scratch disk for Photoshop 1.0 back in the day. :-P

Now the kicker is I have compatible 2GB and 4GB SCSI drives (the other two I picked have a 68-pin SCSI-3 interface and are not compatible with the enclosure).  So yes, I could have EVEN MOAR K's.  Maybe one of my other drives could be allocated toward an A/UX installation (if such a thing actually exists)... but wouldn't you need an order of magnitude more RAM than what the Mac Plus supports to get it working well, not to mention some kind of domain controller?  Who knows...

Unfortunately I have not been able to install System 6 on it just yet because one of the System 6 installation floppies seems to be corrupt and it won't let me proceed with the installation.  Nevertheless, hopefully I can still set this HDD to be my scratch disk for Photoshop 1.0 so I can actually run a "Who can make the best art?" contest at the retrocomputing meetup this Saturday.  Besides, with not having the HDD running the system and programs, I can amuse people on how many times you have to swap the damn floppy disks out just to have it load a program or sometimes even load menu options in your program.
Posted by GOSHtastic - Game shows, Options, Software, and Hardware at 10:55 PM No comments: